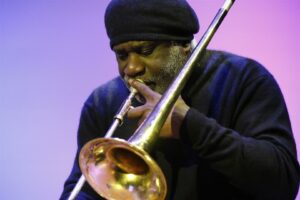 During the ’80s and ’90s, trombonist Frank Lacy, straddled the fence between avant-garde and mainstream forms. Lacy can count Dizzy Gillespie and Abdullah Ibrahim among the prominent leaders for whom he’s worked. Indeed, Lacy spent a year-and-a-half as music director for Art Blakey’s Jazz Messengers and played with Bobby Watson’s Horizon band, which says everything about his bop credentials.

Lacy was born and raised in Houston, TX. He came from a musical family; his father was a teacher and a guitarist and his mother was a gospel singer. Lacy began taking piano lessons at the age of eight and took up the trombone soon after. Lacy attended Berklee School of Music in Boston, where he met and jammed with Branford Marsalis, Greg Osby, and Marvin “Smitty” Smith. Frank was featured on Roy Hargrove’s Grammy-winning CD, Habana.