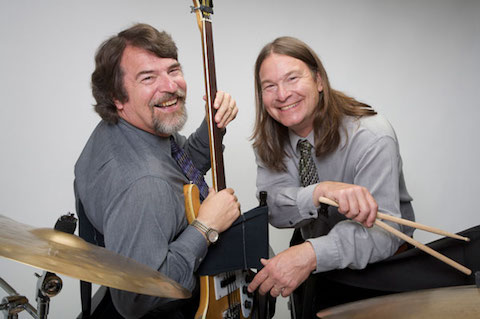 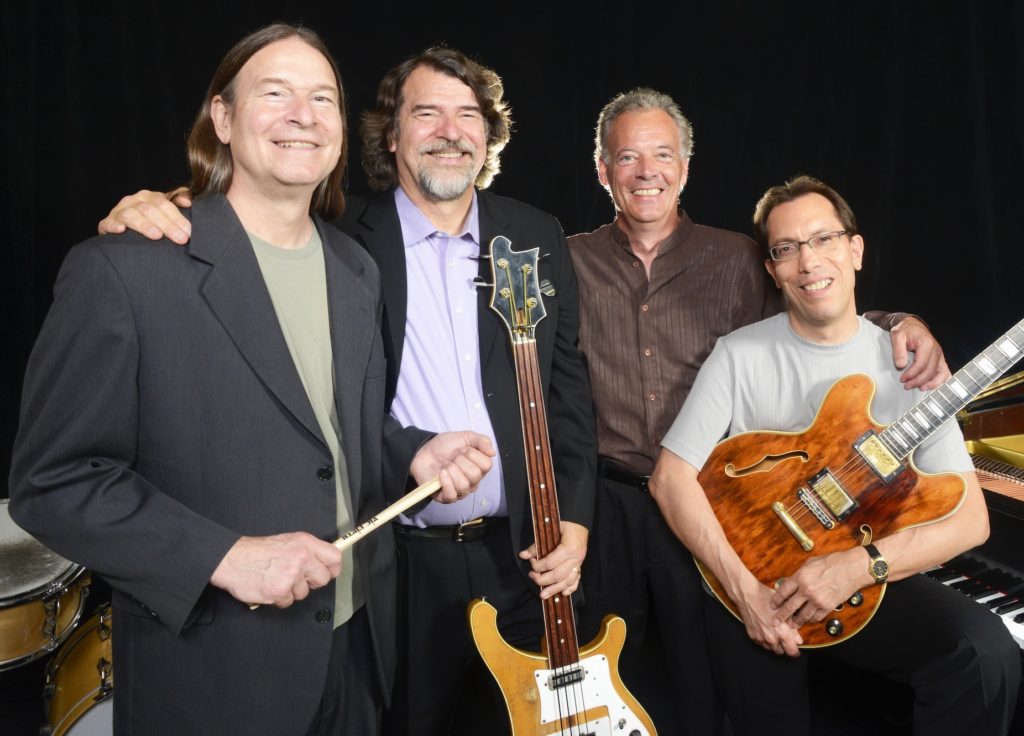 Chris and Dan Brubeck have been making music together practically all their lives. Drummer Dan and bassist, trombonist, and composer Chris cut their first record together in 1966—nearly a half-century ago. They’ve subsequently played a variety of styles in a number of different groups, as well as with their father, jazz giant Dave Brubeck, and with their own Brubeck Brothers Quartet. With Dan and Chris as the foundation, guitarist Mike DeMicco and pianist Chuck Lamb, complete this dynamic quartet. They perform at concert series, colleges, and jazz festivals across North America and Europe including the Newport, Detroit, Montreal, Playboy/Hollywood Bowl, and Monterey Jazz Festivals. The Quartet’s last CD, LifeTimes was a hit on the Jazz Week radio chart where it made the Top Ten list as one of the most played jazz recordings of the year. The Brubeck Brothers Quartet performed at the Jazz Forum on Friday, May 18 and Saturday, May 19.

Dan Brubeck: It’s interesting. I did kind of play around with other things, but it’s like I’d pick up a trumpet, and it’s loud, and it’s this and it’s that, but I had a ton of energy when I was a kid. I think that’s why my dad really directed me to the drums. I was very frustrated as a kid and had a lot of, I don’t know if I’d say anger, but frustration, so it comforted me to play drums because it was a way for me to get all that stuff out of myself. And if I was feeling weird, I could just play and play and play. The drums were always in my house because my dad always rehearsed there with Joe Morello, so he had a drum set that he kept at our house for rehearsals and I was allowed to play them, so I played them all the time. So literally, I can’t remember when I wasn’t seeing a drum set as a little cat or whatever. I mean it took a while for me to reach the pedals and all that kind of stuff. I started to do gigs, I would say, around 9, something like that. I know Chris and I did a record when we were 10. Neither of us have the balls to listen to it.

We did record, so I guess we were gigging probably way earlier than that because we were doing stuff that led up to doing a recording. And then, all through high school, I was always playing in bands. It’s funny because Chris and I were in Connecticut at Wilton High School, and a lot of the kids who were playing then were like great players. One of them was John Scofield. He was the guitar player and this rock band was put together with kids from the high school, so we always had that going on. Then for school, I started going out with frat bands and playing at colleges all around in the south, and then I joined Two Generations of Brubeck and my older brother Darius’ band.

Dan Brubeck: I’m thankful that people are interested in what I’m doing and that they’re a part of a growth process for me. All musicians have a lot of doubts. It’s not an easy world. And you know it’s easy for me to look around and go, “Oh my God. That guy’s so great,” and I’m like “What am I doing trying to do this?” And you know, it’s weird how you can reflect in that way. And I’ve had the same people that I go, “Oh my God” come up to me and go, “Oh my God.” I get it. You know everyone has something to offer and it’s all very different.

Dan Brubeck: I like the club. I like that there’s people coming out and supporting jazz and that’s important. You know, Mark was saying how originally, he had the place in Tarrytown that my dad used to play in that held 800 and some people. But he was saying how nowadays, it’s hard to fill a club. Times have changed, so I think it’s very exciting.

Salina: How did you come to play the instrument you play?

Chris Brubeck: Well, in my case, being the third son, my dad urged me to play piano, but I didn’t want to play piano so much because I already knew he was a really good piano player. My older brother Darius already played the trumpet and my older brother Mike already played the sax, so what was left was the trombone, so I wanted to play that. Then after I was playing the piano and the trombone, I got into a situation where my brother Darius, who had been doing some cover gigs in bars, said he’d teach me how to play guitar, but then wanted me to switch to bass. And that’s how I started playing bass. I ended up on bass and played many years in my dad’s group on bass and sometimes trombone. I got to go to a great music school called the Interlochen Arts Academy, and I started my own rock band there, and out of that, we started doing our first recordings at RCA and Atlantic and Columbia and touring around. After the rock-n-roll phase of my life, Dave asked, “Will you start playing with me?”

So I said OK because I had done about four or five years of playing at every rock club in the United States and realized that if I started playing with my dad, I’d get to play jazz…and stay at really good hotels…and play Carnegie Hall and the equivalent all over the world, so I did that for about 20 years, off and on. It’s hard to say how long I did this because there were times when we played together in the 70s and early 80s and 90s and made more than a dozen recordings together, but then I finally got off the road and worked more as a composer. Dave asked me to compose arrangements for his band, and sometimes I would also play with a London Symphony and things like that. I’ve become more of a writer, too, as a composer. Recently, I wrote a concerto for the Canadian Brass, and before that one for Sharon Isbin who is a famous classical guitarist. And I’m writing a new one that premiers in two months with Jamie Laredo and Sharon Robinson who are a famous husband and wife violin cellist team. So that part of my life is marching forward. I learned a lot of that because Dave did a lot of classical writing too, so we worked on things together.

Chris Brubeck: To try to keep up with all the different music that I’m doing, if you can, if you are someone that can appreciate classical music and jazz. I work real hard at both of those things. I also have another group, Triple Play, which is my group with a great harmonica player Peter Madcat Ruth and Joel Brown, and we keep chugging along doing things. In fact, the last shows we did were at Washington National Gallery with the Elisa Monte dancers, so it was like that trio plus modern dance. So that’s fun too.

Chris Brubeck: Well, what I’ve enjoyed most about it was the proximity to the people and the clientele of the club. Really good people who are really into it for the music. You know, I remember the old days. I played this gig with Andy Laverne, a famous pianist who lives around here. Dan and I and Andy had a trio. This could have been 35 years ago, and one night I had played at Carnegie Hall, and the next night I was playing in a club in Ridgefield, Connecticut. And the people were complaining about how loud we were and we were trying to play soft. And I was saying, “Oh, I’m so sorry. I didn’t hear EVERY single bit of your conversation. I got most of it. Whose daughter was graduating and when and all that.” This is not that kind of club, at all, which is great. This is a great thing. 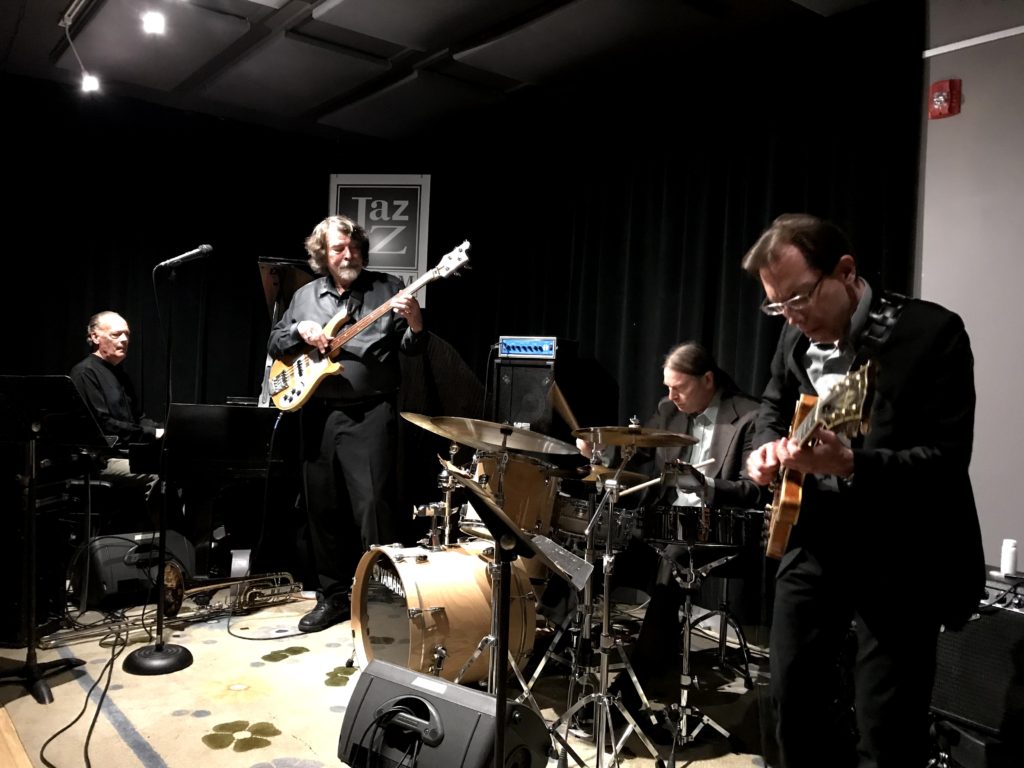