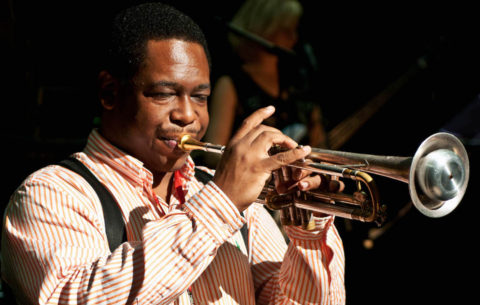 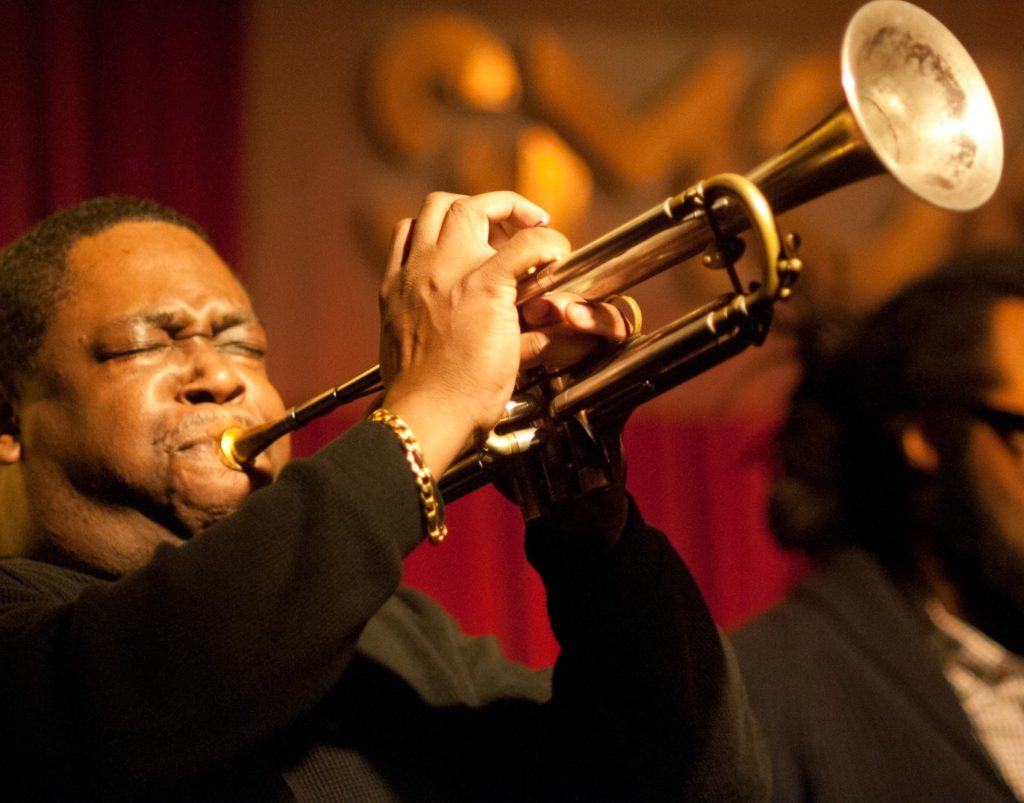 Over the past two decades, Freddie Hendrix has become one of the most in-demand trumpeters in Jazz, and beyond. Also an accomplished composer, arranger and educator, the Teaneck, New Jersey native’s skill and versatility has resulted in him working with a wide array of performers who range from the Count Basie Orchestra and The Christian McBride Big Band, to Aretha Franklin, Stevie Wonder and Alicia Keys. The Freddie Hendrix Quintet performed on Friday, May 25 and Saturday, May, 26 at 7 and 9:30 pm at the Jazz Forum.

Freddie Hendrix: I learned in Elementary School, in fifth grade. I heard a gentleman by the name of David Brown, who’s from Omaha, Nebraska, who happened to be a schoolteacher at that time. He was demonstrating all the brass instruments, the tuba, euphonium, trombone. But when he got to the trumpet, the sound just went through my soul. I was, like, I’ve got to investigate this trumpet. So that’s how I started. Two years later, also with the same teacher, he was a great dixieland player and loved Louis Armstrong, loved Louis Armstrong, and when I heard jazz for the first time, Mr. Brown had what was called a town-wide jazz band, which meant that other schools within the district of Teaneck, New Jersey, were allowed to audition for this jazz band. And at the time, I was very poor reader. I couldn’t really play the trumpet at all. I was able to get a sound, but my reading was poor and I just didn’t take it serious. So when I didn’t get into the jazz band, I was discouraged, but not to the point that I wanted to quit. And something made me go home — this was the summer at the end of seventh grade — and dig into my father’s record collection because as a kid, you ramble into things, and I found a black man with a gold horn, and it was Louis Armstrong.

But I didn’t know the significance of Louis, or that he was this great, great trumpeter. I put his record on and it changed my life forever, and I immediately, naturally, just started trying to imitate all of his singing and all of the songs that were on this record. The name of this record was “Louis and the Angels.”

So that got the attention of my two next door neighbors who were also very significant in my development as a musician. One neighbor’s name was Melvin King and he was an avid jazz fan. He said he was friends with Blue Mitchell. And my other next door neighbor was the distant cousin of the late great Oscar Pettiford. His name was Jimmy Pettiford and he was a bass player who actually used to work with Monty Alexander a number of years ago. They used to play in a club called Gilly’s. Mr. Pettiford had two daughters and his second child was named after the club; her name was Gilly. So anyway, I got their attention — they used to hear me practicing all the time, so Mr. King stopped my mother on a Sunday afternoon when she was coming home from church and he said, “Is that your son across the street practicing the horn?” She said, “Yeah.” He says, “Send him over to my house. I want to give him something.” So I went over to see Mr. King and when I walked into his house, he said, “Come into my living room.” We went to the living room where he was playing jazz music. He was like, “Do you like this sound?” I was like, “Yeah man, I like that sound.” And he was like, “Do you know who that trumpet player is?” And I was like, “No.”

And he’s like, “That’s Chet Baker. Do you like that sound?” And I said, “Yeah.” He gives me a stack of records like a mile high. And it was all of the cats: Dizzy Gillespie, Charlie Parker, Sonny Rollins, Thelonious Monk, Clifford Brown, Freddie Hubbard, you name it, all of the great, great jazz icons that we all admire, and look up to, and aspire to be like. Those were like my textbooks. And I began to dissect it, little by little, listening every day. I mean, when you’re that young in age, it’s hard to get close to playing at that level. So what I did was I would listen and I would sing. I would practice singing these lines and these melodies and such, and little did I know I was internalizing the music, so whatever I wasn’t able to do at that time, eventually I was able to get to. And by singing the music and internalizing what you’re listening to, you become a great improviser. If you listen to great improvisation, you’re going to eventually become a great improviser…if your mind is capable of functioning on that level. And through the grace of God, here I am.

Freddie Hendrix: I’d say to my fans out there to continue to support his music. Jazz music is not dead by a long shot. As long as there’s youth who are still embracing it, which there are, this music is going to go very strong. And some of the members of my band are a testimony to that. And I say to you to not be afraid to embrace younger musicians because children are our future and give them a chance because they have something wonderful to offer and something to say, too. And the ones who are the most important, you will be able to tell in their music, that they’ve studied the history, that they’ve dived into the past, because treasuring the past brings forth the future.

Freddie Hendrix: The club is amazing. I’ve known Mark Morganelli for a long time. We’ve never been close friends, but we’ve always known each other. I actually met him when I was 18 years old. In Haworth, New Jersey, where the late great Clark Terry used to reside. And this was at the time that Dizzy Gillespie had just passed, maybe a year later, maybe 1994. They had what they called a 100 trumpet salute to Dizzy Gillespie. And that was the first I knew of Mark. And so as my name started to develop, I ended up on a gig as a sideman of somebody that he hired, and we got reacquainted. Then I did something for him in Dobbs Ferry last summer with my band, and I asked him about this club, and he said, “Give us a year and let me see how we roll. If everything is going good, I’ll bring in your band.” So here we are. Wonderful place. I wish him and Ellen much success with it because they certainly deserve it. Best wishes to them. God bless them all. And thank you so much. 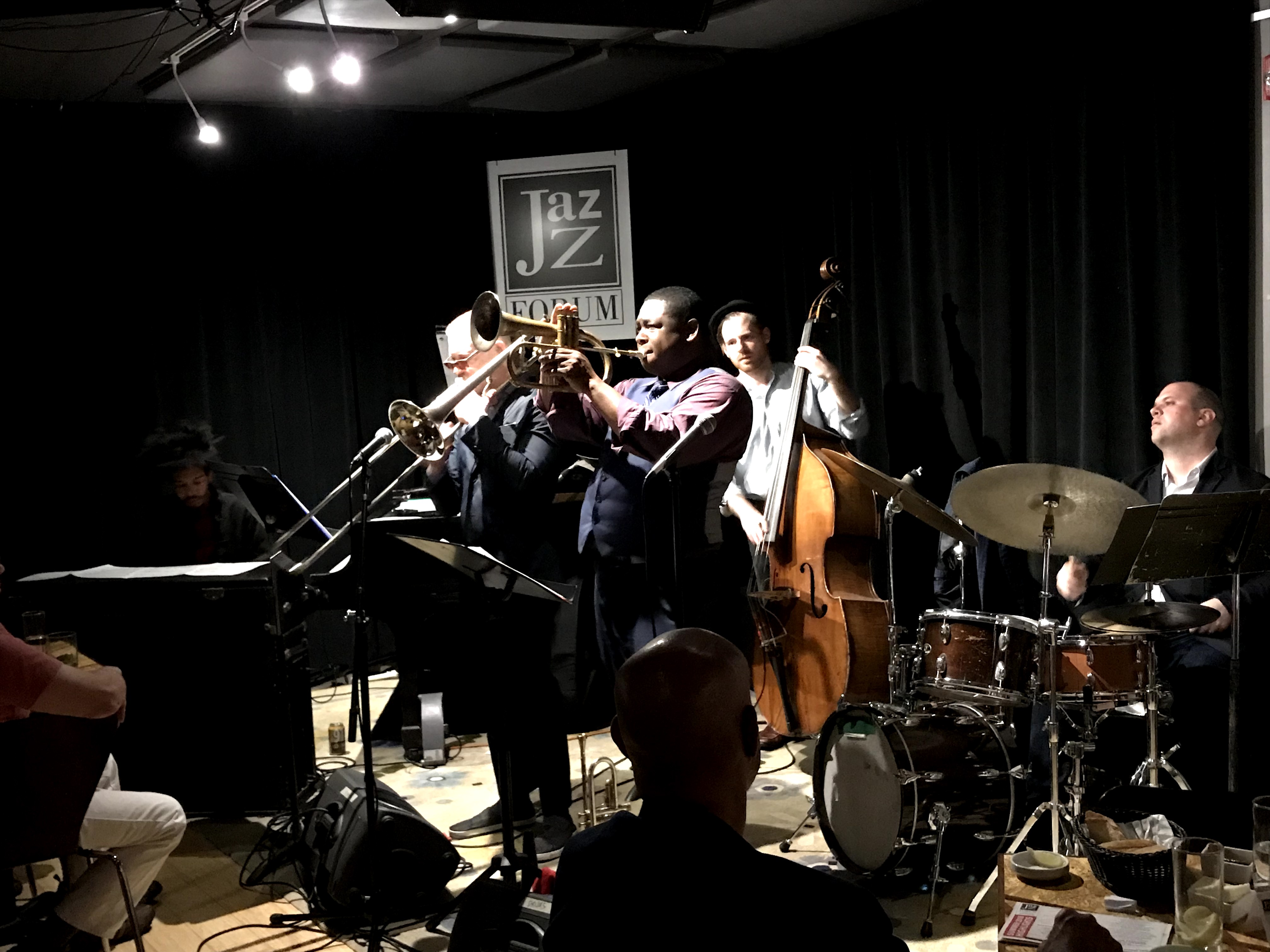