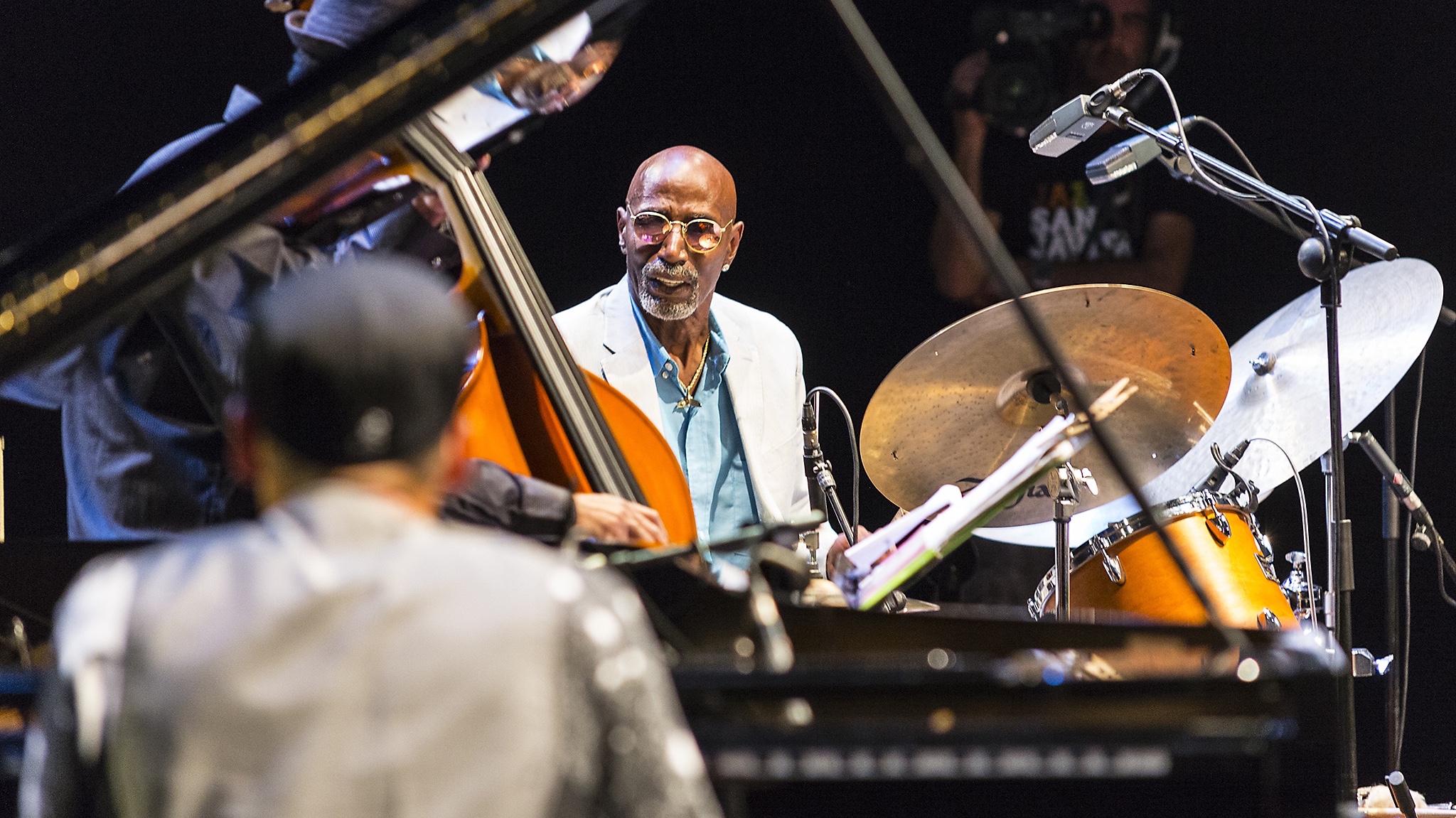 As the son of Thelonious Monk, percussionist T. S. Monk’s home was the gathering place for such musicians as Art Blakey, John Coltrane, Miles Davis, and Max Roach, who gave him his first pair of drumsticks.

I’ve always been a drummer, but actually, I stopped playing for six years. That was really weird — 1984 to 1990. And before that, the previous ten years I’d spent playing R&B and singing. I started playing with my dad when I was 20, but I was late getting to the instrument; I didn’t start playing until I was 15.

Art Blakey gave me my drums, and then my father sent me to Max Roach’s house. And that was that. And that’s how I learned, hanging with Max. When I came back to jazz in 1990 from R&B, thinking about the things I had wanted to do when I was a kid and first started playing, I said, “Wow, I can actually do some of these things.” I’ve been having a ball for almost 30 years now as a drummer playing jazz.

The body of work left behind by guys like Max Roach and Buddy Rich and Art Blakey and Roy Haynes is so amazing. I mean, it’s enough to keep me occupied until I’m like 95, if I can live that long. That’s the attraction for jazz. Jazz is an intellectual endeavor on a certain level, and there seems to be a never-ending repository of information to acquire — new information all the time.

Jazz is an intellectual endeavor on a certain level, and there seems to be a never-ending repository of information to acquire

The great pianist, Hank Jones, once said that when he was 70, he had played with Coltrane, he had played with Byrd, he had played with everybody. At 91, he said he couldn’t believe how much music he had learned between 70 and 91. So that’s what keeps you going. There’s always something new to play. There’s always something new to do. I had a good time with R&B music and had a couple of hit records, but subsequently, I leaned more towards the intellectual side of the instrument and jazz. When I was playing R&B, they called it “chopping wood,” and I didn’t want to spend the rest of my life as Paul Bunyan, so to speak.

Jazz is extraordinarily healthy. You know, jazz is like roaches. They say that if they nuked the entire planet, the roaches will survive. And jazz is that way because jazz, as I see it, is the most human of musical endeavors. As a consequence, it’s the only genre of music that’s played in every single country of the world. Jazz is about reflecting who you are, and that’s what everybody in the world wants to do.

They want to find some way to be themselves and yet interact with other people, and communicate with other people, and get rid of all the barriers that separate us. Jazz breaks down all those barriers. I mean, real integration started in this country with Benny Goodman hiring Lionel Hampton, you know, and guys like Chuck Berry playing down south, and you’ve got white kids on one side of the road, black kids on the other side of the road, and the music brought them together. Of course, he was playing early rock & roll, which was rooted in gospel. It’s the same roots as jazz — gospel and the blues — and there’s something extraordinary about jazz that just brings people together.

You know, jazz is like roaches. They say that if they nuked the entire planet, the roaches will survive. And jazz is that way because jazz, as I see it, is the most human of musical endeavors

In all the oppressive countries of the past century — the Iron Curtain, the Soviet Union, South Africa, places like that — jazz was always the music that was truly banished. They didn’t want any jazz because jazz does things that any repressive regime hates. It makes people think, and it brings them together, so I think jazz is very healthy. If you look around, particularly in this country now at the high school level, high schools now have jazz bands. They’ve given up the classical orchestras for the most part. They want jazz bands because jazz actually works with every generation, and particularly this millennial group because you can be yourself, and that’s what everybody wants to do.

I mean, I used to see graffiti in New York, and what was the graffiti? Some guy’s name. And really what he’s saying is, “I’m here,” you know? Jazz really goes to that ideology, which I think is fundamentally human. We create all these structures in terms of governments and countries, and all these things that divide us, but when left to their own devices, for the most part, people just want to be together, no matter where they are. We’ve got all these artificial things like racism and sexism and religion, all these things that divide us, you know — my God is greater than your God — and all that kind of silly stuff. But if human beings were left to their own devices, with no big brother kind of thing, humans just want to be merry, get along and be happy. That’s what everybody’s looking for in the world.

Classical music has all these structures, and hierarchy and lower-archy, and all that kind of stuff. And rock & roll and R&B and all the popular music have to have somebody that stands in front and they’re the star. But in jazz, once you begin to play, whoever is soloing is the band leader at that moment. So you have this team that embodies this whole American thing that came out of African Americans.

You’ve got this team, but at any given point, anybody becomes a leader, and everybody else supports them. There’s no age requirement. There’s no demographic requirement. There’s no religious requirement. All we have to do is have something to say. Getting back to my original point, that’s why I think it’s the most human of all genres because people want to say things, and jazz is the way, in terms of music, that you can do that.

What do you think about the Jazz Forum?

Well, Mark has been doing it for a long time, you know, and the club is beautiful. It’s laid out really nicely for a jazz club. He’s got the bar over there, and he’s got the high tables and the low tables. And the band is in the corner, so the music comes out in a vortex, which is correct. That square room thing is, from an audio standpoint, not where it’s at.

That’s why you see the greater venues have kind of a “V” shape to them and shells and things like that that project music. So this room projects the music to the point where you don’t need a whole lot of microphones and that kind of thing. So the club is dynamite. And the people of Tarrytown come out to see me in droves. I’m so humbled by the whole thing. So between the club and the patrons, this is the bomb.